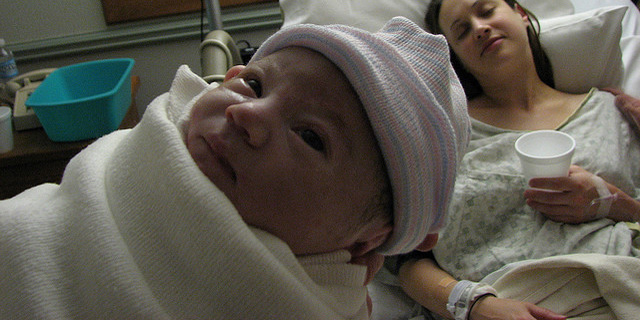 To get to that fruitless search, I have to talk a little about my birth story. Don’t worry, this isn’t a true “birth story” complete with cervical texture descriptions, though I have that if you’re interested.

When I was in labor, the first thing I said to the nurse in the hospital was, “I want a natural birth, but I’m getting an epidural.” That pretty much summed up my attitude going in. I figured I would probably want pain medication but who knew. Maybe I would just breathe through it like those orgasmic women in the birth tubs on YouTube.

Not only did I not breathe through it, I considered killing myself in the middle of it.

I am in awe of all the women who voluntarily endure the excruciating, horrifying, blinding, torturous pain of labor without so much as an aspirin.

Who are these women? Well, there’s Ricki Lake, for one. She made the ultimate chick flick documentary, “The Business of Being Born,” about her natural childbirth in the tub of her New York city apartment. And then there are millions of other women, including my mother (who endured it three times) and some of my best friends who were all just…able to handle the pain.

But back to how I was not able to handle it in any sense of the word.

Instead of immediately getting the epidural, I summoned up my inner Ricki Lake and headed to the bathtub. The tub was supposed to “make the contractions easier.” But instead of harnessing the strength of pregnant Ricki Lake, I felt more like she was jumping on my uterus, approximately every three minutes.

When I got out of the tub, 45 or so hellish minutes later, I was pretty out of it, and it’s hard to remember exactly what I was thinking–except for this one, crystal clear thought: I was looking at the ceramic edge of the sink jutting out of the bathroom wall. The corner was rounded and caught the glare of the almost soothing orange hospital lights. I thought that if I knew I had to face this pain unmedicated, I most certainly would crack my skull on that sink and bleed out on the cold tile floor to the sweet relief of death.

Then I took the thought further: Surely other laboring women throughout the ages must have come to this same logical decision. I imagined native women throwing themselves in front of herds of buffalo, Japanese women falling on their husbands’ Samurai swords, Victorian ladies politely smothering themselves in their bustles.

And then I made a mental note that when this was all over, if I was still alive, I would Google how many women had committed suicide during childbirth.

And for the first time ever and the only time since, Google gave me NOTHING–not one example of anyone ever packing it in mid-labor. Not even a passing mention of anyone even having the thought of such a thing. And I consider myself an exceptional Googler. Not only am I formally trained as a professional Internet researcher, but I’m also informally self-trained as an amateur stalker. I really believe if I can’t find it on Google, it didn’t happen (which is why everyone is free to make up their lives pre-1995). When you think about the size of the Internet, that’s pretty astounding. To put it in perspective, I got 614 exact hits for the search “baby has two buttholes.”

The only remotely relevant results: an instruction on some kind of horse breeding role-playing game that banned “suicide during birth” and several versions of “if men had to have babies, they would commit suicide during labor.”

Was I the only woman in the history of the world to consider suicide during labor? Was my pain tolerance that low? Was I that weak in both mental and physical constitution?

A week before I went into labor, I got a burn on my thumb. It was very minor. But it formed a little blister and hurt if I didn’t keep ice on it. To prepare myself for the pain of labor, I practiced taking the ice off and seeing how long I could stand that “pain.” I made it about seven seconds.

I did prepare for childbirth beyond the burned thumb experiment. I took prenatal yoga and a private birthing class where the instructor got into bed with me and my boyfriend to demonstrate some massage techniques. I’m not sure what that’s supposed to prove, but the point is I wasn’t completely ignorant of all the tools that help you manage the pain. And I did use all the techniques–when I was in “early” labor. Then I got to “active” labor and wanted to kill myself.

I have to admit I was never committed to doing it drug-free like hardcore natural moms are. I didn’t have a doula or take a Bradley class. But I also wasn’t planning on getting any and all meds as soon as possible. Basically, I was somewhere in between “16 and Pregnant” and Ricki Lake.

After the epidural, my labor went quickly and easily until the part where I was supposed to push the baby out. Her heart rate was wildly fluctuating, and I ended up with an emergency C-section. The C-section was good because it produced a healthy baby; it was bad for every other reason you can think of. As sore as you are after regular birth, at least the baby came out of a hole that was already there. The brand-new gash in my lower abdomen was simply a nightmare to heal. I couldn’t pick up my newborn or get out of bed myself. Worst of all, it even hurt to complain.

Once again, maybe it’s just me. Some women find the recovery of a C-section only mildly uncomfortable. To be fair, those tend to be the kind of women who find waxing downright pleasurable. While my recovery did not make me suicidal, it did make me never want to have another baby exit my body via any space, man-made or not. But I loved having the baby outside my body and definitely wanted another one. How could the Internet help me out with this conundrum?

Google told me the “cost of surrogate birth” ranges from $40,000 to $100,000, including all legal fees, medical care and various other costs associated with having another woman carry and give birth to your baby, like Phoebe did for her brother in an episode of “Friends.” Google killed that dream pretty quickly for me.

But now, over a year later, I feel like I’m totally ready to be pregnant again. The whole “you forget the pain” thing is totally true. Because as much as I remember how I wanted to die, I can’t really remember exactly what it felt like, although I haven’t forgotten enough to think I might not get an epidural the second time. That would involve some kind of lobotomy.

So I guess my point is that if you do want a natural birth, you should really want it and commit, not just by watching a few videos online and doing a couple squats in a yoga class. Do something that will really prepare you, like cutting off your arm off and seeing if you can breathe through it. If you don’t want a natural birth that bad, maybe you can skip paying someone to get into your bed and show your partner how to knead your butt muscles. And if you end up with a C-section, well then sister, I feel your pain–and unless you’re loaded, or have a quirky sitcom character for a sister, ain’t no one else gonna feel it for you.

Next time: Google as a postpartum depression therapist