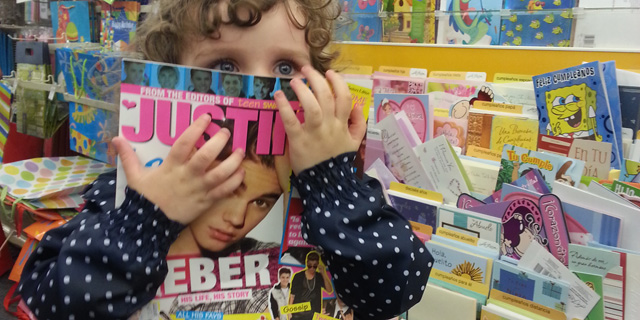 A super fun part of parenting with someone else is trying to blame your kid’s worrisome behavior on the other parent. There is a special sense of joy that comes with being able to pinpoint exactly where the latest freakish habit came from and knowing you had nothing to do with it. This almost never happens because kids are great at coming up with horrifying behavior all on their own. But that doesn’t stop the desire to lay blame whenever possible. “Maybe if you didn’t drink so much beer in the house, she wouldn’t be so attached to her bottle.” Things like that.

I could hear the barely contained glee/rage in my husband’s voice one day after picking our daughter up from daycare when he said “So, what have you been telling Mabyn about Justin Bieber?” Apparently, our 2-year-old had answered the question of “What do you want for dinner?” with “Justin Bieber.”

That’s not quite as disturbing as it sounds, as we have a running joke where Mabyn will answer “mama” or “daddy” or the old standby “poop” when asked what she wants to eat. In terms of the toddler comedic repertoire, that’s pretty hysterical…to her. But the joke has never included celebrities. I told him that I definitely didn’t talk to our daughter about Justin Bieber, and couldn’t recall her ever having seen him or even hearing his name in my presence. He concluded it must be our daycare provider, who, at 31, was not immune to still coming down with a case of Bieber fever.

Before we got a chance to ask Ms. A if she was a Belieber, Ms. A beat us to the punch and confronted us about Mabyn’s newfound interest in the Biebs. When dropping her off one morning, she told us, “She says his name all day. She whispers it when she falls asleep at naptime.” Awesome. It can be disconcerting to have no idea how or where your kid has picked up something. (Obviously this is more disturbing when it’s physical, like scabies.) But it happens all the time. The other day when she was putting on her shoes, Mabyn announced, “I’m the baddest girl in town!” Surprisingly accurate, really, but we’ve never said those words to her. Did someone else? Was it in a commercial? Did she hear it on the street? Why do some things make such an impression in their little, crazy brains? Does Justin Bieber have subconscious messaging in his songs that toddler brains can pick up on? Um, sort of.

A Google search of “Justin Bieber psychological appeal” brings up some fascinating articles on the genius way the Biebs appeals to girls both very young and much olderfemales.

Bieber fever is nothing new. It’s the timeless appeal of the non-threatening teen icon. The classic heartthrobs tend to be slightly feminine and super young-looking, and therefore not as scary as a big, hairy, full-grown man crush. Now the fact that there’s an entire website devoted to lesbians who look like Justin Bieber makes that much more sense.

Turns out with our daughter, Bieber fever was a short-lived phase. Just like trying to nurse other children’s nipples and shouting “penis” during library storytime, the behavior went away as quickly as it appeared. This proved once again that completely ignoring a problem often turns out to be the best parenting strategy. Mabyn has now moved on to a fixation with another classic sex symbol, E.T.

We never were able to pinpoint where Mabyn found out about Justin Bieber but that’s not surprising. Children are almost supernatural in their ability to soak up what they encounter in the world and make it their own…or maybe I left her alone with an iPad on YouTube for an hour—doesn’t really matter.

Here’s a list of Google searching reflecting other things Mabyn has been “into” since she turned two.