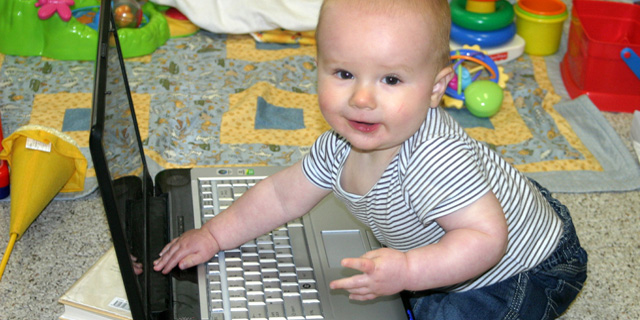 When you give birth to a baby, after you get your mind around WTF just happened to you physically, the mental WTF begins. There are so many questions when it actually sinks in that you’re full-time in charge of this little human being who has just appeared.

Some questions you have to answer yourself: How comfortable am I putting my nipple on display for the general public? Some are for your mom: Hey, can you hold the baby again? Others are clearly for your doctor: Could you confirm that my baby doesn’t have gigantism because her head appears to be three times bigger than every other newborn’s? And then there are questions that are just a tad too graphic for your mommy group, not urgent enough for the doctor and could possibly draw the attention of Child Protective Services. Those questions are best left to someone both wise and discreet. Those questions are for Google.

Questions like: Why does my baby have two buttholes?

Just days after my daughter Mabyn was born, during one of her many, many diaper changes, I noticed that in addition to the place the poop was assumed to have come out of, there was this…other place. Above her normal, *clearly* correctly functioning butthole there appeared to be another opening…it wasn’t actually a hole, just the hint of one – a faux hole if you will. So after spending way too much time literally up my daughter’s butt trying to assess the situation and finding a literal and figurative dead end, I headed to the computer. I typed “why does my baby have two buttholes” into Google and let that loving, nurturing search engine do its magic.

And beautifully, I found another mother out there who had typed the exact same thing.

From this page and the wondrous places it took me in that magical journey that is Googling, I found that Mabyn’s phantom anus was just a deep dimple, common in 1 to 2 percent of Caucasian babies and would disappear in time and was totally harmless. In .16 seconds, I had put to rest my fears that my daughter was sprouting a tail, or worse – two outlets for pooping.

And just like that, Google began to raise my baby. Forget Mommy and Me classes, forget sought after nannies and videos on how to Saran wrap your baby to sleep, Google was the most knowledgeable and effective parenting aid out there–and it was free! Google quickly replaced epidurals as my favorite thing about being a mom so far. Before the baby came, Googling was casual and fun. You can’t spell “fundus” without “fun” after all! I looked up all the random and repulsive things that happen to your body during pregnancy just to entertain/gross myself out. (“How far does the penis come to baby’s head during sex in 9th month?”) And as my due date approached, Googling all the things that can happen during labor just became an exercise in terror and repulsion (look up meconium in Google images). But Googling after the baby was born–once she was a real, breathing baby all cleaned of her own poop, er, I mean meconium–then Googling became not just a pastime, but a parenting choice. The phrase “What did Google say about it?” is often the other half of the daily conversation I have with Mabyn’s dad describing the various baby behaviors that are only interesting to a baby’s parents. Googling has clearly become my job. It is expected of me. Just like morning wake-ups, doctor appointments, diapers, nail clipping and food preparation are his job. Basically, I’m responsible for Googling and nursing.

I hope this article has disappeared from the Internet before Mabyn is old enough to Google herself. I would hate for her to find out her mother was obsessed with her shadow anus. Or worse, have her prom date stumble across the information. Google is such a cruel master; what he builds he can also destroy.

But overall, I’m incredibly satisfied with my Google rearing. I guess you could say it “just works for my family,” to use the language of politeness from mommy chat sites. Call it the “virtual parenting movement” to use more baby blogging vernacular. My double baby butt search was the first of many Googles that all yielded equally surprising and comforting results. Of course the journey is not always smooth. Almost every search brings you to the initial conclusion that your child is or will be horribly impaired and/or disfigured for life. And, of course, you can’t help but follow those results down the Google hole and read everything you find. Thanks to some initial inquiry results, I now consider myself an expert on babies born with tails.

Hopefully, my searches can be of some use to other Google-minded parents. Or at least make other parents feel better about their parenting. Here’s a partial list of some early searches, which I like to think of as my digital baby book. Looking back on these, those first blurry days after giving birth come right back into focus:

And that was just the first week of my baby’s life. She’s now one year old.
This is the journey of how we got there, one Google at a time.