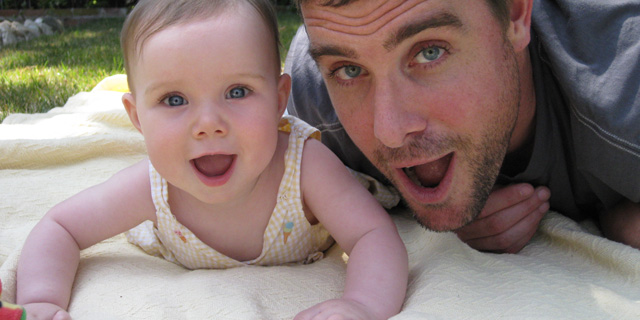 My daughter looks strikingly like her father. People are always pointing out how unlike me and like her father she looks. It’s ok since her dad is very pretty. And apparently, there’s an evolutionary reason for babies looking like their dads. According to renowned sociological biologist Dr. Google, babies resemble their fathers so the dads stick around. Infants’ dad-like features are a primitive DNA test to show paternity. This is the second result that comes for the search: “baby girl looks like father”

However, if you change the search to “infant girl looks like father,” the first result is an equally reputable article suggesting the exact opposite evolutionary theory.

WTF Google! Both of these articles are from real sources. What am I supposed to do, take in the information and make up my mind alone…like, offline??

The second article says that babies don’t look like their fathers so a cuckolded dad will take care of his best friend’s offspring. It says the idea that babies look like their fathers is just a myth, partially perpetuated by mothers. Apparently, moms like to say babies look “just like daddy” so daddy doesn’t start matching junior’s features with the mailman’s. In the words of Chris Rock, “he’s got your hat!”

By the way, while Googling for that exact Chris Rock quote, I found this article in Psychology Today about how Chris Rock is funny because his humor reflects established evolutionary psychology.

Oh Google, you’re just so perfect sometimes. I could never stay mad at you.

Not having your likeness passed on can make you feel like a genetic wimp made up of a bunch of conquered chromosomes. I wonder if my dad felt that way with his middle daughter, who looked nothing like him as a baby. My dad and his weak-ass genes/tight-ass jean jacket

It’s amazing he didn’t haul ass when she came out. It’s especially strange when, in the case of both me and my father, the dominant traits of dark hair and dark eyes are conquered by the gentler, kinder blonde and blue-eyed traits. And here’s (possibly) a much more extreme example of that.

It’s Mabyn’s piercing blue eyes that make her look so much like her dad and so strikingly not like me. Despite the fact that brown-eyed people, even two of them, can have blue-eyed offspring, it’s amazing how many strangers say, “her eyes are so blue! But you have brown eyes…” Then there’s that moment where they’re clearly wondering if she’s adopted. Not that I would care if she was, but I do feel the need to give a cursory genetics lesson and let them know that I did, in fact, give birth to her. Because while it’s condescending, it’s not as offensive as showing them my C-section scar.

Most adults accept this (with the exception of one adamant CVS clerk who I think almost called the cops on me) but young kids have a hard time. A 5-year-old asked who Mabyn’s mother was at the park the other day. I told her it was me and she gave me a “yeah right” look. Then she said, “but you don’t have blue eyes.” I said “but her father does.” She thought for a minute and then said, “Oh, you guys are playing family. I play family with my best friend all the time.”

Like most parents, one of the most fun parts of “playing family” is the “will my baby’s eyes stay blue” game. Most (white) infants have dull, dark bluish eyes for the first few weeks or months, before they turn brown or solidify as blue. I tried to Google the chances of Mabyn having blue eyes and failed miserably. The best I could come up with was she had between a 1-in-2 and a 1-in-64 chance of having blue eyes. Every search leads you to the dreaded Punnett square and then I start feeling bad about my education because I never mastered this simple genetics method in ninth grade. I then Googledreally hard and finally came up with a  reliable genetics predictor for eye color.

In about a 10h of the time, I probably could have actually learned how to do the Punnett square with the BB and Bb bullshit, but finding this fun drag-and-click chart was much more satisfying.

After you have the odds of the eyes staying blue, you just have to sit back and wait to see if they change or not. Mabyn’s kept getting bluer, but that didn’t stop the haters. Strangers loved to say things like, “Oh, her eyes are so blue. My baby’s eyes were even bluer than that, but they changed by the time she was [one month older than however old your baby is] months.” Now she is one and a half and the age of eye changing just keeps going up. “Think they’ll stay blue?” people ask. And then they always have a story about a 3-year-old whose eyes turned to shit overnight.

I do think brown eyes are also lovely. All eyes are lovely. I think my sensitivity to the blue-eyed issue comes from my childhood growing up with a blue-eyed sister (and also, maybe a little from the whole Hitler blonde hair/blue-eyed race thing).

I still remember how strangers would fawn over my sister’s blue eyes when she was a baby and I was an already bitter 4-year-old, being ignored until I crapped my pants to remind the world of my existence.

If we have another baby girl and she has brown eyes (as there’s a 66 percent chance she will, according to Internet genetics calculators for idiots), I hope she isn’t jealous of Mabyn’s eye color. But at least now I have the rudimentary understanding of genetics to know that when she grows up, she too has a 20 percent chance of one day having a blue-eyed baby of her own who will fill that childhood void by being complimented, however passive aggressively, by strangers.

Here’s the Google searches of a desk chair geneticist: