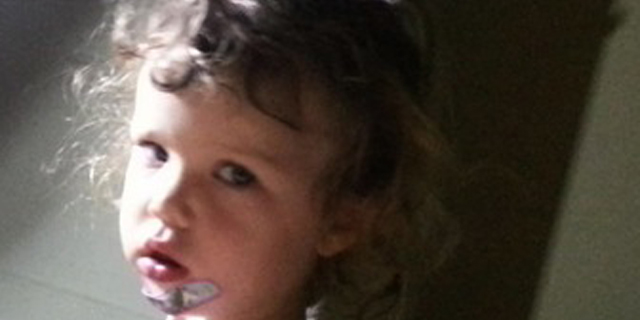 You’ve seen it before: an angry toddler screaming and thrashing around on a shop floor or sidewalk. Do you feel for the child or the wide-eyed parent? Contributor Anna Lotto delves into her personal experience with these attention-grabbing emotional outbursts.

There’s a reason all those “look at my baby crying” photos on the Internet are photos and not videos. The live show is way less cute. It looks like this:

Every child is different, so each kid turns into a demonically possessed beast in their own special way. Here’s how my unique flower of a 2-year-old unleashes her inner monster.

The worst episodes tend to center on my daughter’s frustration at being unable to travel back in time. I try to do something like open the front door to go outside. Enraged, Mabyn yells that SHE wants to open the door. Irrationally thinking I can satisfy an irrational 2-year-old, I say “Fine. You open the door.” Now she really gets going and she screams, “I want to open the door BEFORE.” This refrain is repeated at an inhuman pitch for the next 10 to 12 minutes. She breaks for an extended shriek every 90 seconds or so. She actually says nothing but “I want to open the door BEFORE” on a loop, like a traumatized parrot. She somehow manages to get a good 10 decibels higher when she hits the “before.” Attempts at comfort are met with preternatural stiffening of the body and hyperventilated cries of “No! No! No!” 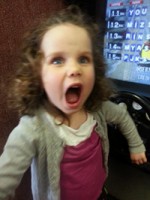 Once this happened in our front yard and a concerned neighbor, from OVER A BLOCK AWAY, walked to our house “just to make sure everything was safe.” I don’t blame him—it sounded like someone was being tortured, not frustrated over missing out on the exact timing of a door opening. And I have to say, I’ll take the genuine concern of a stranger over any family member trying to say anything to me, ever, during one of these episodes. When Mabyn lost it once at a wedding and was screaming her snot-filled face off in the middle of the dance floor, an aunt said, “I guess you don’t put these pictures on Facebook.”

But to be fair, even when they ask something benign like “What happened?,” I don’t react well. I turn into my daughter by yelling, “She wants to open the door BEFORE!!!” And depending on how closely related I am to the person, I add “Fuck off!”

Some variants of the door/before refrain include:

When you find yourself facing the wrath of a monstoddler in a full on homicidal rage, you hope that Google can save you. And then your hope dies.

There’s a huge blind spot on the Internet when it comes to how to deal with a toddler tantrum. This hole is all the more glaring because there is a ton of advice on how to prevent a toddler meltdown. “Make sure they never get too tired or hungry—that’s what triggers meltdowns.” Great advice. But I can’t give my baby an Ambien in the middle of a scream fest (wait, can I? Note to self: Google “baby Ambien”) and I can’t very well toss Cheerios down her throat while she’s mid hell-piercing scream (my aim isn’t that good). So, while that advice is very helpful pre-meltdown, it does dick-all when I’m in the midst of being terrorized by a tiny, hysterical banshee.

Listen, prevention is great, but all the condoms in the world aren’t going to help someone with full-blown AIDS. I needed some practical tips.

The advice that is out there for what to do during a meltdown sounds like it was written by a toddler mid-meltdown. It’s just a list of contradicting demands. Hug them/don’t touch them. Put them in their room/don’t leave them alone! Teach them it’s wrong/don’t punish them.

It doesn’t really matter what anyone says because all you can do if your kid is in the middle of a massive meltdown is stare in awe at the sheer amount of force their little bodies can produce. It’s sort of impressive as well as frightening. Like watching Bruce Banner become The Hulk.

When the tantrums began, I thought there was nothing to worry about. They started just before she turned two, so I figured this was part of the “terrible twos.” I commiserated with other moms about these outbursts like we were all dealing with the same thing, until I witnessed another little girl “throw a tantrum” during a playdate. This consisted of the girl plopping down on the floor and saying “No!” in a normal, non-deafening voice…and that was it! The mom tried to bond with me over our shared plight of “getting through this difficult stage,” but I wasn’t having it. It was like when my father tried to compare labor pains to his lactose intolerance.

After some targeted Googling, I learned Mabyn’s crazed fits fall within the bounds of normal, psychotic rages for a child. Apparently, like a Viagra erection, I should only call the doctor if it lasts longer than four hours.  So when it happens now, I ignore it and hope it goes away on its own – just like a normal erection.

Desperate Google searches of a mom on the verge: