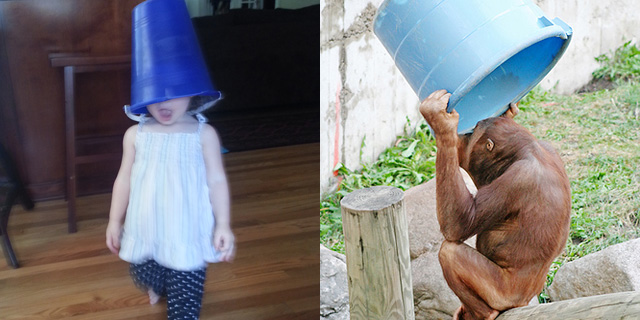 When my daughter was around 10 months old, she did her first really exciting trick. When I gently said “Do down dog,” she would get into a little baby down dog yoga position. It was thrilling. She couldn’t walk or talk, but she could understand this instruction. Obviously, I started ordering her to do it several times a day. I never thought I would be competitive about my daughter’s development, but I was aware that my pleasure in seeing her perform this task felt very “Toddlers & Tiaras“-ish.

Around this time, I had a dear old Canadian friend who hadn’t seen Mabyn in a few months come to visit. I eagerly paraded Mabyn’s various new skills—breathtaking displays like her finger going to the right place when I asked, “Where’s your nose?”

Being Canadian, my friend is constitutionally incapable of feigning enthusiasm. She simply said “So, she can do things you can train a dog to do now. Cool.” And then she added, “When do human babies become smarter than chimps? I think it’s around three.” We proceeded to have a heated debate over the abilities of babies versus chimps. “Well, they can’t laugh.” “Of course they can. Go to Youtube right now.”

My Canadian chimp expert friend was right. Chimps totally giggle, and if you Google them, you’ll also find that they’re generally thought to be as smart as a three-year-old child.

But it gets worse. Some chimps are smarter than teenagers.

Some studies even suggest some chimpanzees may outsmart college students.

So moms, whenever you feel proud of your child for doing anything, just remember, until they’re 21, you can add “just like a chimp” after everything they accomplish. Some genius chimpanzee figuring out how to take a bucket off its head, and my 2 year old daughter, not quite there yet.

If knowing that your baby isn’t as smart as a primate isn’t enough to humble you, the Internet is there is to help you do what it does best: compare and despair.

Before the Internet, it was much easier to blow off tales of amazing baby feats as urban legends. “Oh, I’m sure you could read at 7 months. Your mom definitely didn’t make that up.” But now, there’s accompanying video that thwarts your satisfying ability to call bullshit.

Here are some things you can Google which all have solid video proof if you want to see how your child measures up to the babies of the Internet. Thank God for the Internet and Canadian friends, or I would most certainly have Mabyn addicted to Go-Go juice by now.