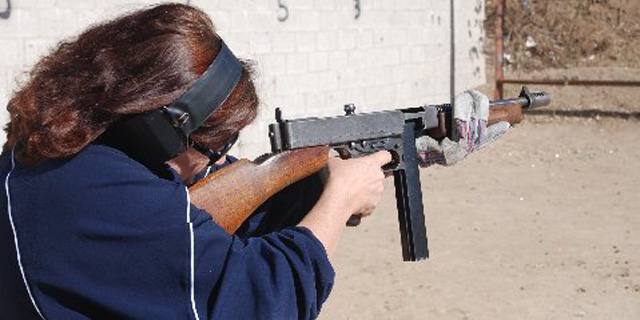 Like most people, I’ve experienced ups and downs in my life. Because I’m a writer, I tend to measure my happiness by how engaged I feel in my creative pursuits, but each of us has times when we are less than enchanted with our lives, when we feel stuck in a job or situation and can’t yet see the way out. I had a particularly long downturn recently, when a creative block left me feeling mired and hopeless.

Then one day as part of my job as a script researcher in the film and television industry, I called the Bureau of Alcohol, Tobacco, Firearms & Explosives (the ATF from here on) to check some facts. Special Agent Christian Hoffman was friendly and helpful. By the end of our conversation, he invited me to apply to the ATF’s Citizens Academy.

“It’s a terrific program,” he said, “ATF agents volunteer their time to speak about their experiences undercover. You’ll get surveillance and tactical training, and there’s a range day when you’ll be able to shoot fully automatic weapons.” There was a session starting in a few weeks, or one in the spring.

I was thrilled at the opportunity, but also intimidated. Guns and federal agents were certainly out of my wheelhouse. What about the other people in class? Would they all be gun aficionados? What exactly does the ATF do and was I comfortable being affiliated with a big government agency? I thought I would put it off until the spring to wrap my mind around it, but my husband encouraged me to go ahead and apply for fall. He was right. It wasn’t the kind of chance I was willing to miss.

As I filled out the simple form, which gave permission for a background check amongst other things, I glanced at the Joan Baez quote pinned to the board behind my desk: “Action is the antidote to despair.” This wasn’t the writing conference or retreat I had been telling myself would shake me out of my creative funk, but maybe doing something challenging would distract me from the doldrums. It couldn’t hurt.

It was thrilling just being escorted by an ATF agent from the lobby to the key-access only second floor of an anonymous-looking office building on the first night. I was released into a large room where a few of my classmates had already gathered. We checked in and had our photos taken for the badges that would be issued the following week. A classmate asked me how I’d heard about the academy. It was a great question that I asked of most of the people I met in the next few weeks. Participants came from all walks of life, from the entertainment industry to the firearms industry, ranging from lawyers, real estate professionals and beyond.

We started out learning the history of the agency and moved quickly to listening to actual surveillance tapes and agents’ tales of real life undercover operations. By the end of the first night, I was starting to feel more like my former curious, engaged self and a lot less focused on my troubles.

A few weeks in, we had our first field experience — doing surveillance at a local shopping mall. Each of us was rigged with a powerful walkie-talkie. I attached mine to the waistband of my pants and ran the ear bud cord under my collar and shoulder length hair. Another cord ran down my arm to a microphone attached to my cuff.

My group consisted of an ATF agent, a team leader and three teams of two surveillors. Our task was to follow a confidential informant, the drug dealer he rendezvoused with and her body guard, all played by ATF agents. At first it felt obvious to bring my hand to my mouth to respond to the team leader’s instructions, but it became clear that shoppers weren’t paying any attention to us at all. At one point, my partner and I had to follow the “dealer” to the parking lot and try to get her license plate number. After she took a package from the vehicle, I walked up to it with my cell phone out, ready to take a photo, when I realized there was someone sitting in the car.

It was pretty spooky to realize that I’d exposed myself and was obvious to the faux bad guys. I would have blown the real operation. During the debriefing we learned that she’d made all of us. Still, I felt I’d learned a few valuable lessons that I would have been able to apply if I were prepping to be a real agent.

Our next field day was tactical training with real guns that had been overhauled to shoot paint balls. We were fitted with bulletproof vests and helmets and taught how to enter one room after another down a long hall to sweep for bad guys. When I was point man, leading a line of trainees toward a paint-gun-armed ATF agent playing the bad guy by yelling, threatening and throwing things into the hall, my adrenaline was high. My breath fogged my faceplate until I could hardly see, but I remembered a warning on the first day of class that this would happen. You know it’s just a game but you respond like it’s the real thing.

As I burst into a room on the left side of the hall, the other team charged the agent/bad guy on the right side. A paint ball meant for the other team caught me on the inside of my bicep. I was well aware of the painful hit that would leave a blue and pink welt, but I kept right on going. It felt great to know I could keep on going and not lose my cool completely.

Everyone was pumped about our last field day. We met at a gun range in the Angeles National Forest to shoot at targets with guns that had been confiscated in ATF operations. They included a startling array of semi- and fully-automatic firearms. I had the feeling that it was the main reason many of the participants had signed up, but for me it was maybe the most challenging. I’d only handled a couple guns in my life, shooting at cans with my dad when I was a kid. I was honestly a little afraid to hold something that is designed to kill.

Special Agent Tomlinson dropped a flash bomb near us, demonstrated how a bulletproof vest stands up to various kinds of weapons, and popped a couple of amazingly centered shots to show how bullets tear through ballistics gel, which is roughly equivalent to the consistency of human flesh. It was a good last-minute reminder that safety precautions aren’t silly at all. We were free to line up to try any of the eight guns that waited on four long tables set up 15 feet from paper targets. An agent oversaw each gun, showing us how to hold them and what to expect. I started with a shotgun and a .356 Magnum, then moved to a Thompson submachine gun. It was scary and loud even though we had earplugs on underneath our headphone-style protective gear. The last weapon I tried was a fully automatic rifle whose barrel started to rise as I let a stream of bullets fly. I was glad that the agent’s steadying hand on my shoulder stopped me from accidentally shooting into the air. It was weirdly exhilarating even though it was hard to tell if I hit the targets, which were tattered pretty quickly after we started.

On the final night, we had a graduation ceremony complete with certificates, pins and an inscribed blue brick to commemorate our participation. It was a bittersweet evening. I was glad to thank the many agents who donated their time and to applaud each classmate in turn, but sad to know the adventure was over.

Passing through the now-familiar lobby into the parking lot for the last time, I reflected on the journey I’d just taken. I held my own on the field days. I also tried my skills in assessing the danger level of a situation using the ATF’s video simulator and an electronic gun, met a bomb sniffing dog, and met the amazing gentleman who started the ATF Citizens Academy, Special Agent in Charge John Torres.

I began the program with a mindset of insecurity and nervousness and ended up feeling not so much confident that I’d make a stellar ATF agent—they are a rare and honorable breed—but that I can try new experiences and face challenges I haven’t yet dreamed of without making an utter fool of myself. It helped me break free from a cycle of introspection that wasn’t getting me anywhere and back on a path to exploring the world around me and writing about it.