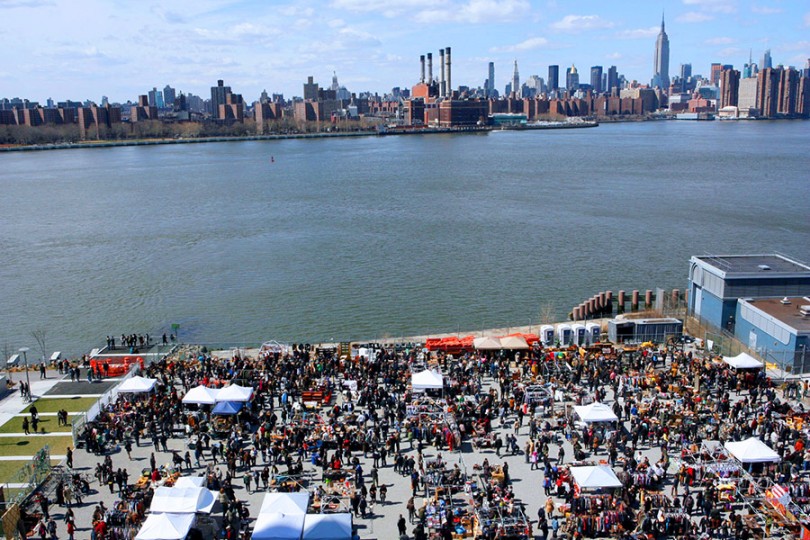 The Brooklyn Flea and its various offshoots have become a regular weekend affair for many Brooklynites, and for good reason. Hitting on fashion, food and culture all in one in a great setting (indoors or out) and among great people, it’s a great way to pass the weekend.

In the summer, the market holds court Saturdays at the flagship location in Fort Greene, a 40,000-square-foot schoolyard at Bishop Loughlin Memorial High School; and on Sundays in Williamsburg, on the East River waterfront between North 6 and 7 Streets. The Flea’s winter home is the former Williamsburg Savings Bank, at Skylight One Hanson: a beautifully polished and proper contrast to the odds and ends on display at the market. Photo via Flickr: Henry Shi
I arrived at Skylight One Hanson just after 3pm–what I consider to be prime flea market timing. As the market opens at 10am, it is likely I missed out on some of the goods, but later in the day vendors are more inclined to negotiate prices, since many are eager to wrap up by 5pm and get on with their evenings. After walking through those beautiful glass revolving doors and making my way through the crowd at the entrance, I stopped to take it all in. What was once a vast and empty lobby in a bank is now filled with everything from old factory furniture and handmade watches and jewelry to refurbished writing machines, pillows and blankets, old Coach purses, gently worn Bean Boots and Pendleton galore. And it does not stop there. Vendors take up the main lobby but also line themselves along the walls behind what used to be the teller stands; even more set up shop in the upstairs mezzanine, and the rest settle in below, in what used to be the basement vault.

Some vendors have a better knack than others for merchandising; those booths are more likely to draw me in immediately and where shoppers will likely spend more money, but don’t discount the rest. Like any good bargain shopper, it’s worth taking some time to go through each booth and check out each little item. You never know what you will walk away with.

Prices on some items are still fairly reasonable considering in-store costs, but others are definitely marked up for the crowd. Those old ripped and worn flannel shirts selling for $45, for example, or that moth-eaten LL Bean sweater, are not as one-of-a-kind as the 1950s card shuffler you can get for $20 or the paint-chipped industrial-looking step ladder that’s all yours for $195. Vendors are very much aware of our collective eagerness to have these one-of-a-kind items all to ourselves, and because of the scene and the set-up–which lends that we are supporting homegrown goods and honest, hard-working people–we are all too justifiably eager to pay.

The Brooklyn Flea is not only a space to pick up used shirts and vintage eyewear, but it’s also a foodies’ haven, with vendors offering artisanal pulled pork sandwiches, made-to-order brick oven pizzas and cookies made with duck fat and seasoned with rosemary. And, oh, crop-to-cup coffee and homemade donuts (try the Blood Orange). My husband is a huge fan of the Asia Dog, whereas I am Porchetta partial myself. The Red Hook Lobster Pound‘s New England clam chowder is pretty damn good, too. The food vendors at Skylight One Hanson are few, as the basement is only so big and cooking capabilities are limited, but once The Flea moves back outside, prepare your palette; vendors quickly multiply and choices are aplenty. Photo via Flickr: Kthread
In addition to Skylight One Hanson, for the winter season The Brooklyn Flea hosts SmorgasBrewery, a rotating lineup of five food vendors located inside Brooklyn Brewery‘s tasting room in Williamsburg and taking place every Sunday from noon to 5pm.

The Brooklyn Flea’s winter season runs through early April, after which you can catch the market outdoors, on Saturdays in Fort Greene and Sundays in Williamsburg, on the waterfront. Every April is also the start of Smorgasburg, a massive all-food green market with five to 10 farmer stands and packaged and prepared foods, purveyors from New York City and across the region. This market is Saturdays only, from 11am to 6pm.

Upon graduation from university, Sarah Schutzki moved to New York, where she spent a few years working in online marketing before fleeing to France for a summer to contemplate life and what she should do with her own. While abroad, she spent much of her time writing and taking photographs, running along the coast, learning a new language and exploring a new culture. She met the man who would become her husband and ended up sticking around, spending another two years roaming the streets of Paris and officially jumpstarting her career in film.

In 2010, Sarah moved back to New York, where she serves as co-founder and executive director of Paris-based NOMAD Films. She's also a producer for the French production company and media house La Blogotheque. In addition, she works as a freelance producer and is currently revisiting her earlier attempts at a screenplay. Sarah is excited to expand upon her writing career as a contributor to Constant Chatter.