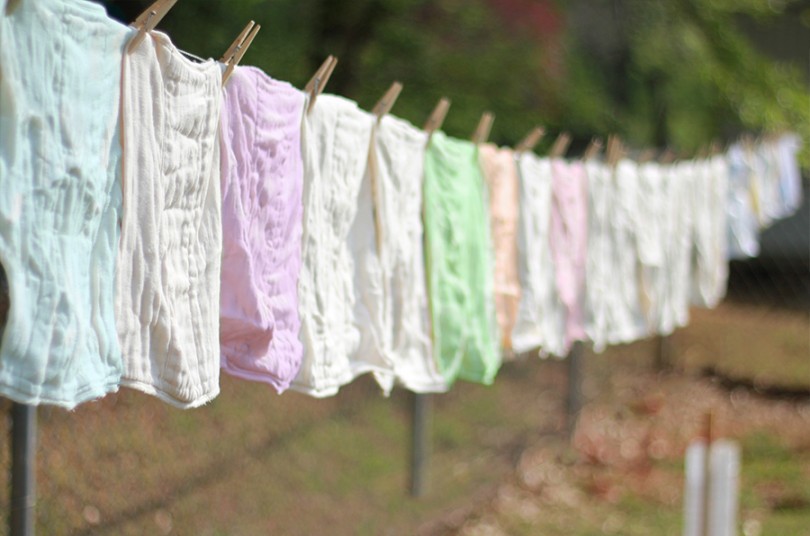 Good news! I can now tell you how to bring a roomful of gabbing ladies to an abrupt halt. Inform them that you intend to use cloth diapers instead of disposables.

When I mentioned my decision to go cloth at my baby shower, I was surprised by the reactions that ensued. Among the baffled faces, some women looked as though I’d flung poo into their mimosas. Others looked embarrassed and avoided eye contact, as if I’d farted and not copped to it. There was a muttered, “Pffffffft – good luck with that,” and someone else made a point to tell me she’d only lasted three days before she gave up and bought a package of disposables.

Why the negative feedback? It’s not like I planned to make diapers out of tattered bedsheets patterned with sketchy stains. I wasn’t sitting there with an oversized safety pin in my mouth looking for a chubby baby thigh to stab. Cloth diapers. What’s the big deal?

Saving the world, one cloth diaper at a time

Early on in my pregnancy, my Baby Daddy and I discussed our diapering options. We sipped our organic fennel seed tea in between snacking on pesticide-free raw quinoa sprout salad, and agreed cloth was definitely for us — but only if the cotton was free-range.

We based our diapering decision on positive feedback from people we respect and trust. I also did some reading and found out that disposables have all kinds of creepy toxins in them. Not to mention all those landfills ripe with the dirty diapers of babies past…

I’ll admit I felt overwhelmed when I strolled into a “baby boutique” that catered to the new variety of parent who seems cool with paying $80 for an “all natural” cloth doll with no discernible face or limbs. Eventually, I was led to a wall of cloth diapers in a multitude of materials and colors. Raw cotton, organic bamboo, envelope shell, all-in-one, “St-Lucia Blue”, “Lemon Zest”, “Raspberry Sorbet”… I just sort of blinked at the salesgirl as she went on about the importance of phosphate-free detergent, and fantasized about my next meal. (Not quinoa, by the way.)

Yes, it did feel like I was stepping into an unfamiliar world — a world I’d up until then only read about on bumper stickers in Santa Cruz, CA, and other hotbeds of hippiedom. I’d like to say that I am passionate about making a difference by living green and eating only local foods — even if that means living on a strict diet of pine needles and maple syrup in the early spring months here in Quebec. But the truth is, I cheat. Sometimes I buy strawberries in December. Some of the toys in my daughter’s room were made in [GASP] China. I’ve shopped at a Super Target and enjoyed every last minute.

The down ‘n’ dirty

That said, once I did some more field research and spoke to more people, the world of cloth diapers became less intimidating and seemed much more doable. While I was still pregnant, we signed up with a local Montreal diaper service, Baby Auric, a company that uses the “pre-fold” style of cloth diapers. And yes, cloth diapers come in as many varieties almost as there are colors: pre-folds, flats, fitteds, AIOs (All-in-Ones), pockets … and don’t even get me started on diaper covers or shells. The pre-fold flavor involves a washable cotton insert (for the “business”) and a waterproof cover, which acts as the undies portion of the diaper duo. We picked our colors, paid our start-up fees and a nice lady came over to give us a lesson on all things diaper. (More on all that in a bit.)

That said, we resisted following up with the cloth diapers at first. Why? Who knows? It was a hectic time at the hospital, disposables really did seem more convenient, we were just trying to keep Baby (and ourselves) alive, take your pick. But after a month-and-a-half of using disposables and standard issue baby wipes, our darling girl’s bottom had begun to resemble nothing more than a shredded piece of meat. That sort of clinched the deal for us, and we got on the hopper to activate service stat. Now some poor guy has to come pick up a bag of dirty diapers from my doorstep once a week, and everyone’s happy.

How much for that Lemon Zest Yellow Pre-Fold in the window?

To break it down even more, here’s an example of the costs and services associated with our particular diaper company. The start-up fee was $180 (Canadian), and that included 75 pre-fold liners; six shells (of our choosing, and yes, my choices did include “St-Lucia Blue” and “Raspberry Sorbet”); a roll (100 sheets) of flushable, biodegradable liners for more, ah, intense bowel movements (like when she gets older and upgrades from sweet-smelling breast milk poos to gnarlier human food ones); a diaper bucket with its own air-freshening filter (you want this, trust me); and the aforementioned home visit from an honest-to-god diaper specialist for pointers on diaper washing and folding. This was quite helpful, as folding those little suckers was on par with advanced origami.

Once you pop the babe and use your Very First Diaper, you simply call up the service and “activate” your account, which is when they begin the monthly billing. In our case, that comes to $100/month, and includes pickup of dirty inserts and drop-off of clean ones once a week. The service also provides us with as many cotton inserts as we ask for (we usually go through 75/week), and we wash our own diaper shells. When Baby hits the six-month mark, the price will go down to around $84/month because, well, older babies poo less.

I sometimes wonder if my neighbors think I practice Tibetan Buddhism. Not because of my (infrequent) serene facial expressions or a refusal to stomp on that damned ant colony that seems to have taken over my pantry. No, I imagine they look over at my clothesline and mistake the drying diaper shells for Tibetan prayer flags.

I guess that’s better than festering garbage bags jammed with stinky disposables, though.