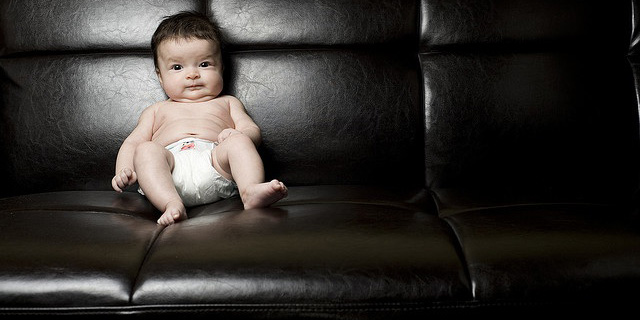 This morning I nearly stepped in a pile of excrement. I didn’t freak out. There was no lazy dog owner to hurl a dirty look at. I wasn’t on a sidewalk or in a park. I was in my daughter’s bedroom. I was wrangling Baby into a clean outfit and in my exhausted state forgot that I had dropped a soiled diaper on the floor a few minutes earlier. Before you judge me and think, “What kind of slob throws a nasty diaper on the floor,” remember: cloth diapers. There is no roll-the-stinky diaper-into-a-tidy-plasticky-ball-and-toss-into-garbage option. I get to flush that sh*t.

After I came within an inch of squishing poo between my bare toes, it struck me that since becoming a mother, I’ve had a few run-ins with the dreaded No. 2 and that there must be some sort of powerful chemical spritzing my brain in order to survive the stink and mess without suffering from any obvious signs of post traumatic stress.

A few weeks ago, I decided to give a freshly bathed Baby some naked air time. I lay down a few diapers and placed her in the crib with some favorite toys. The diapers were there in case she had a little accident. And by little, I mean pee. Without getting into details, I was fairly certain she’d already unburdened herself enough for the day and that any accident was unlikely.

Five minutes alone in her room and apparently she relaxed enough to once again “unburden herself.” All over the crib, the sheets, the toys… Poor Curious George. Poor Grover. Poor ME!

Have you ever had to sit and listen to someone tell a story about their child crapping all over the place as if it was the cutest thing in the world? Well guess what? There is nothing cute about crap, especially when it’s all over the place. Or all over you. And when I say “you”, I mean me.

When Baby was 2 months old, we were invited to an afternoon barbecue hosted by friends with a baby close in age to ours. There were other friends and their children in attendance, and the afternoon was progressing nicely. Friends chatted between mouthfuls of food and drink, the older children played and everyone took turns cooing at the new additions in the room. Eventually, Baby’s diaper needed changing, so our friends offered us the use of their son’s bedroom. A nice quiet room to quickly change her wet diaper before heading back to the barbecue. Back then, we were still relatively new to the whole changing fiasco, so Baby Daddy came along to help. Can you tell where this story is headed? Let me just skip ahead and say that if my daughter had more control over her sphincter muscles, I’m quite certain she would have tagged the bedroom door with “baby wuz here.”

I don’t even know how it happened. I looked away for a second and was hit with a tidal wave of poo. I was taken out by the perfect sh*t storm. Splattered on the walls. All over the changing table. And all over me. My daughter shat all over that poor boy’s room and then his mother had to lend me an outfit because I was covered from chest to feet. My face nearly burnt off from the embarrassment, but I recovered eventually.

Our friends? Well, let’s just say we weren’t invited over for about 6 months after that.