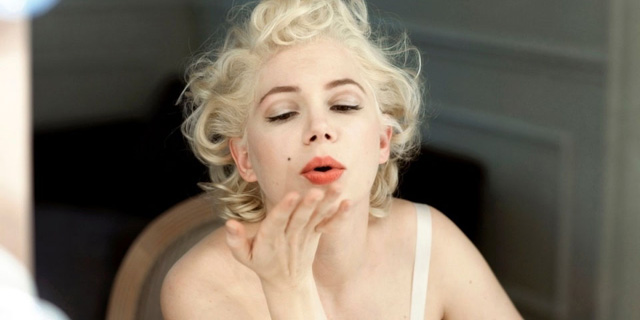 Instead of heading to the malls on Black Friday, I headed to the Arclight to see “My Week with Marilyn” starring Michelle Williams (“Dawson’s Creek,” “Blue Valentine”) as the iconic Marilyn Monroe.

This film is based on Colin Clark’s diaries “The Prince, The Showgirl and Me” and “My Week with Marilyn.” These books chronicle Clark’s time in London working for Sir Laurence Olivier (played by Kenneth Branagh) on the film “The Prince and the Showgirl.” Monroe flew to London with her acting coach and her new husband, playwright Arthur Miller, to work on the film.

In 1956, at the height of her career, Monroe was still questioning herself as an actress and as a bombshell. Though she was surrounded by a close group of people who would boost her self-esteem, the actress often felt isolated and alone. Williams captured the star’s constant struggle with her acting ability, portraying situations when Monroe would lock herself in her dressing room and not come out until the material “felt right” to her. It also shows her questioning her beauty as a person. When she was out in public, she would play the part but when she was alone and away from the rest of the world, she thought she looked horrible.

This movie highlights Monroe’s struggles and her brief relationship with 23-year old Colin Clark, played by Eddie Redmayne, who became her friend, confidante and protector. Monroe felt as if Clark was the only person that understood her and the only one that would tell her the truth. Some critics say that Clark sugar-coated his account of Monroe because he was enamoured with her.

Williams gives an amazing performance and has Monroe down to her wiggle, smile and sexy wink. In an interview in Vogue magazine, Williams said that she had a picture on her bedroom wall of the Hollywood icon, barefoot and laughing in a white dress. In the six months before filming started, Williams studied everything she could to get Monroe’s mannerisms perfect. For the film, which was shot at Pinewood Studios where “The Prince and the Showgirl” was filmed, Williams was given the same dressing room as Monroe used decades prior. Perhaps that helped her get into character even more.