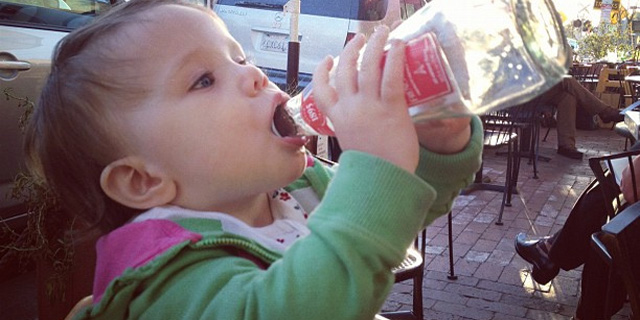 For some reason, at least for modern American women, breastfeeding is far more complicated that its simple name suggests. After all, what other aspect of infant care has its own league? This might be because it can be broken down to so many moving parts: your nipple, your ducts, the baby’s mouth, your sanity, the baby’s temper, etc.

Within my wide circle of breastfeeding mom friends, not one woman had a completely problem-free experience. From infections and cracked nipples to forked tongues, we all had something going on. For me, it was a combination of low milk supply and the desire to have a life.

In my Los Angeles mom circle, which is of course different from a mom circle in rural Arkansas or sub-Saharan Africa, using formula as opposed to breastfeeding was considered to be very close to poison. I felt like I would’ve gotten less shameful looks if I gave my daughter a puff of a Marlboro Red than a sip of formula. As pregnant first-time moms, we were all warned of the “danger” that in the hospital, after giving birth, the doctors and nurses would try and push formula and we should be prepared for battle. I was assured that even if I was producing nary a trickle of milk, my baby would be fine surviving on colostrum until the milk came in. I was coached to say that there was no need for a baby to eat right away because “a newborn’s stomach is the size of a walnut.” The subtext: “Get your sterilized hands off my life-giving nips!”

And, sure enough, the hospital tried to assault my baby with formula on her second day of life, and I gave in and let her take a giant hit of formula when she was less than 48 hours old. Good thing I did, as my milk didn’t come in for three weeks, not the three days it usually takes.

I don’t mean to suggest I’m in any way pro-formula. Breastfeeding is clearly superior to formula for a variety of well-documented reasons. Formula is like using a babysitter: no one would argue that babysitters are superior to parents, but using them isn’t going to damage your kid. However, while I’m absolutely pro-breastfeeding, I may be anti pro-breastfeeding advocates. I understand why there needs to be a breastfeeding militia, given that it was almost wiped out by formula propaganda, but now that it seems we’ve won the “breast is best” war, can we stop making the use of formula akin to euthanizing your baby?

Of course, as I write this, I’m reading an interview with Snooki and her baby daddy–because that’s the kind of important research needed for these kinds of practical and extremely technical blogs. When asked if she was going to breastfeed, Snooki said yes, “to lose weight quicker.” But she adds that her fiance doesn’t want her to breastfeed because he “doesn’t know if it’s better” than formula. *Sigh* Okay breastfeeding warriors, soldier on.

I would like to tell Snooki, and anyone else who will listen, that breastfeeding is amazing–not only because it’s so great for your baby, and it helps you bond and it’s cheaper (and yes, helps you lose weight) but because it’s a beautiful, natural, joyous way to make your baby STFU.

Really, I don’t know why more moms don’t talk about how much easier it is to be able to plug a crying baby with your nipple. It’s like magic. It has been my most essential parenting tool so far (after Googling, of course). Don’t get me wrong, it took a lot of practice to get to the point where I could adeptly soothe my daughter with a quick whip of the nip. And this was after I spent two weeks pumping every two hours around the clock, taking milk-producing herbs and vitamins and ordering illegal lactation-producing drugs from Canada, all in the name of increasing my milk supply. But it was all worth it to be able to lovingly muzzle my baby anytime, anywhere.

If it hadn’t gotten easy, I definitely would have given up and used formula exclusively. And in many ways that would have made me feel like a loser. Which is ridiculous. The breastfeeding pressure can seem so intense that if you fail at the breast part, it’s as if you can’t do the feeding part. And that’s absurd. When I was worried that I would have to stop infusing my baby with heavenly IQ-increasing, immunity-giving, soul-building breast milk and instead start injecting her with allergy-forming, chemical ridden, corporate devil powder, a dear friend sent me this article. Should you find yourself giving your child formula instead of breast milk for any reason, read that and your guilt will fade away (just like your kid’s healthy future – JK!)

But if you do breastfeed, once you’ve gotten the hang of it, another important complication arises: how much alcohol can I consume while nursing?

This is where Google can be your cool best friend or your judgemental mother-in-law, all depending on how you choose your search terms. Put in “breastfeeding alcohol danger” and you’re going to get a giant buzzkill. However, lose the “danger” and your first result is Kellymom.com, the best party site on the web for breastfeeding moms.

Kelly is a mom and lactation consultant but most importantly, she feels like a real comrade in breasts. Her website presents all known facts on what you can ingest and nurse in the most non-obnoxious and easy-to-understand way possible. And the bottom line is that you should just not breastfeed while you’re drunk. Or, as one article puts it “if you feel too drunk to drive, you shouldn’t breastfeed.” Sort of tricky for people who drive wasted, but otherwise, wise advice.

I don’t know how long I’ll breastfeed my baby, probably not as long as Mayim Bialik, but who knows? I bet I’ll still want to bond with/shut up Mabyn when she’s three years old. I’m now 15 months into breastfeeding and it still works like a charm, especially in the morning when I get an extra 45 minutes to sleep while Mabyn gets her nurse on. She has actually learned the ASL sign language for “nursing.” Unfortunately, it looks exactly like the universal sign for “jerking off.” It’s supposed to be the motion of milking a cow, but Mabyn’s version is more, um aggressive. She also says “na na!” loudly and urgently when she wants to nurse, so the combined effect is a baby asking to jerk off “now! now!”

The only other breastfeeding concern is that through her nursing style, which is also rather aggressive, Mabyn has managed to stretch my nipples out to about four inches. But I’m sure they will return to normal when I’m done breastfeeding.

Here’s a list of drunken Google searches, obviously done while baby was asleep, or on the poison formula teat:

Next time: Why does my baby smile at nothing? Google says she’s looking at ghosts.