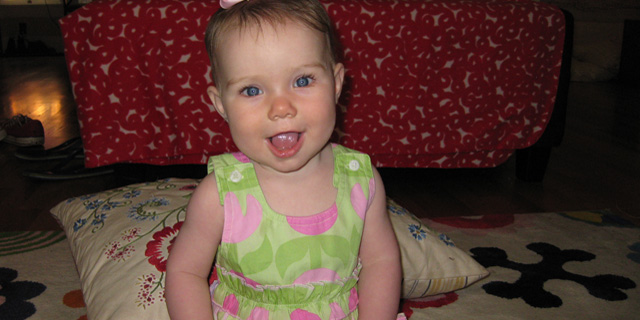 My biological clock/maternal instincts kicked in around age 26. I first began noticing babies, a life form which had been virtually invisible to me for the previous decade. Ever since I stopped being paid to care for them for five dollars an hour, I stopped caring about their existence at all. From college and through my mid-twenties, I was as aware of babies as my parents are of hip-hop. Just like my dad calls all music that isn’t classic rock “disco,” anyone not within five years of my age might as well have been an alien. The thought of children never entered my brain. I had a vague idea that I was probably going to have kids…someday. I would also someday die. These were inevitable facts of life that were not relevant in any way to my daily routine. As far as the present was concerned, I was focused on things like happy hours and cutting bangs, not having a baby.

And then gradually, just like crow’s feet, I started to see them. They first appeared on TV. While flipping through channels, I would stop on babies, seemingly unconsciously, like men do when boobs flash on the screen. It was some kind of visceral craving, like the desire for popcorn at the movies. Soon I was noticing babies on the street and I had to stop myself from touching them–or I didn’t stop myself and became that weird woman who touches strangers’ babies on the street.

The baby-longing intensified and expanded to toddlers and children. I found if there happened to be a kid at a party (and little by little there would be the odd one here and there), I was happiest hanging out with the kid. If I ever did manage to score an actual baby-holding experience from parents I knew at least in passing, I had to restrain myself from acting like a 12-year-old at a Justin Bieber concert.

I also had to restrain myself from becoming pregnant. My situation at the time was not only not “baby friendly,” it was downright baby-hostile. I was living in a studio apartment where I couldn’t even take care of the baby cockroaches that continued to hatch in our kitchen. And honestly, I thought they were so cute, I almost couldn’t stand to kill them. I’m surprised I didn’t make them a nursery. My need to nurture was so strong, I wanted to mother roaches.

It would be many years until I was in the right infestation-free environment to have a child. But given my borderline psychotic desire to become a mom, imagine my surprise when I finally had an amazing, perfect little girl all my own and found myself thinking:Hmmm, maybe I don’t want kids.

It was a surreal revelation, like when Bridget Jones finally loses weight and hates how she looks skinny. Why was I feeling so overwhelmingly ambivalent on motherhood?

For the first time, I considered the alternative to having children. A childless life didn’t seem so bad: sleeping late, drinking wine, lots of money and time to travel. Why hadn’t I thought of this before I got pregnant? All the joy and excitement of parenting was gone. In its place was a long, gloomy road of menial chores set to a soundtrack of endless crying, coupled with a stench of diarrhea. And it all had to be faced in a state of constant exhaustion.

Enter my amazing, wonderful mom friend, Virginia. Virginia was less than a year older than me and had three beautiful, smart and well-adjusted children whom she had all given birth to at home. She was a super natural-style mom, yet was never preachy about the fact that she was having a placenta smoothie for lunch or letting her one-year-old nurse directly from a cow she was raising in her backyard. She was my mom hero. She loved her children so completely, yet so completely unpretentiously, I wanted to be her when I grew up (in 11 months).

Virginia’s youngest son and my only daughter were born within days of each other. I met Virginia in a prenatal yoga class where she had an enviable practice but an even more impressive sense of humor about it all. In between exercises to strengthen our pelvic floors, we solidified our friendship.

By the time I started to feel this strange non-feeling about mommyhood, Virginia and I were extremely close. We had shared so many intimate details concerning our birthing anatomies, I didn’t know where my cervix ended and hers began. So it was not surprising that when I talked to her about what I was feeling, she said exactly the right thing. First she said I was clearly going through postpartum depression, or PPD as the cool moms call it, and then she said something that made all my insecurities as a mother go away: “Oh Anna,” she said, “After my first baby, I Googled adoption agencies.”

She went on to tell me that, similar to me, she had been sure of her desire to be a mother but after a few weeks of it, she thought she just wasn’t cut out for motherhood. Or in her words, “this fucking sucks.” She said she cried much more than her baby ever did in those first few weeks and that she really did look up local adoption agencies and see what the process of giving up a baby would entail. If the best mom I knew had taken her ambivalence even farther than me, then I had nothing to worry about.

And while I declined her generous offer to eat her encapsulated placenta to boost my natural endorphins, I did take her recommendation for a great therapist.

Everyone needs to find their own solution to postpartum depression. For me, it was the right combination of therapy, Google and anti-depressants. For Virginia, it was her mom moving in for a bit and heavy doses of lavender oil.

It wasn’t long before I was back to loving my baby so much I wanted to eat her face off every second. And Virginia’s Google search became a viral sensation in the old-fashioned way–by word of mouth. Almost every new mom I knew at some point felt a varying degree of helplessness around this new reality. And I would relate Virginia’s Google search and watch the relief wash over their faces. Knowing such a great mom could also have doubts was very calming. It was like looking at pictures of celeb cellulite. Hey ladies, we’re all human.

So, once again, Google saved the day.

Obviously PPD is a bit more complicated than that, but I do credit Virginia’s confession as the turning point for me. By the way, if you do Google “putting up an older baby for adoption,” the most frequent inquiries seem to come from mothers of two-year-olds. I can’t wait to see what I end up Googling when my daughter is two.

Here’s what I Googled when she was around two months:

Next time: Googling while drinking, while breastfeeding