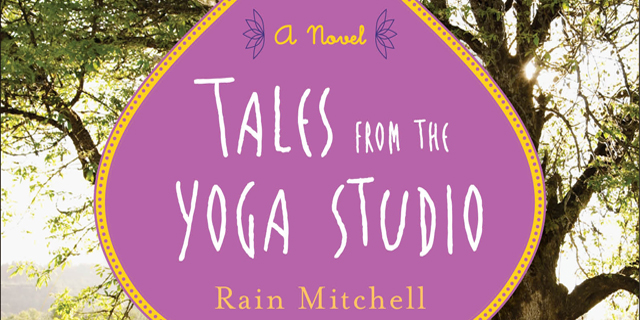 Published in January 2011, Rain Mitchell’s “Tales from the Yoga Studio” (Plume) isn’t the most current of releases, but it gets a vote for one of the year’s most enjoyable. The book weaves together a series of poignant and frequently hilarious vignettes starring five women who are linked by the sometimes inspirational, often pretentious and always fascinating world of the Los Angeles yoga scene. The Skinny: From page one, Lee struggles to reconcile a genuine spiritual connection to yoga with cravings for the occasional cig, the demands of her devoted but needy clientele and the fact that Alan, her business partner slash self-absorbed man-child of a husband, has just moved out on her and their two young children in the interests of “honoring” his “need” for more “space” to get his “head together.”

She’s also being headhunted by a pair of New Age lunatics who own a successful and cutthroat yoga studio franchise — YogaHappens — and want to market and copyright her teaching style for their own nefarious purposes. For Lee, it’s come down to selling out for a fat paycheck and salvaging her marriage — now that Alan, who’s been included in the deal as house harmonium jockey, has put the pressure on — or hanging on to her flagging sense of integrity.

Reasons to Love It: “Tales” is a keen observation of how yoga, once the domain of off-the-beaten-track spiritual seekers, has been co-opted by the fakey spiritual types who have a desperate need to be seen as The Most Serenist of All Time and enough cash to think they can buy it. Mitchell also paints a scathingly accurate and funny picture of some classic yoga cliches:

But not to be confused with a satire, the novel wears on its sleeve an honest appreciation for yoga and the beauty and self-knowledge inherent to this ancient spiritual practice. Mitchell strikes the perfect balance between poking fun and celebrating her love of yoga all at the same time.

Prediction: I’m smelling a sequel, but then I do sort of have an inside scoop here. In an email to Constant Chatter, Rain Mitchell told me that a follow-up is slated to hit the stands May 2012: “It’s called “Head Over Heels,” and it picks up one year after the first book ends. I’m getting very attached to these characters and enjoying following them on their journeys.” Yeah, me too.

Advice: If you haven’t read this book yet, run don’t walk to your nearest bookstore, online or off. And at the risk of jinxing everything that makes “Tales from the Yoga Studio” as good as it is, this book is just crying out to be optioned for TV and film. Can you see it? I’d like to.

More: Visit the official “Tales from the Yoga Studio” website for more on Rain Mitchell, her personal blog, where to buy the book and upcoming events.