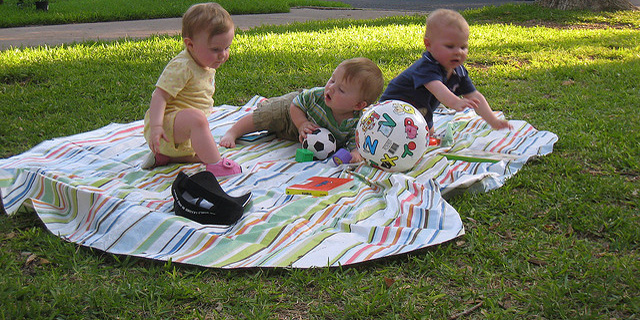 When I was younger I often spent much of my free time mixing dirt with varying degrees of water and baking mud pies in my father’s tool shed; sitting in my parent’s parked car–my freakishly-real-looking baby doll in the backseat–humming to non-existent music and cursing at non-existent passersby on the “road;” or dressing up in my mother’s old clothes and make-up (or what little of it I was allowed access to) and pretending I was on my way to something that was a very big deal. I had Barbie dolls, a big Barbie house and even a Barbie convertible. I had play money and tea sets and stuffed animals that were–to my knowledge and experience–filled with life and thoughts and emotions, and even some very good ideas. And I had a bunch of other friends and peers who were spending their own free time doing some version of the very same thing, at least when we were not doing it together.

These are memories many women have from their younger years: mimicking mothers or friend’s mothers or the women who served as our role models with an innate understanding that one day we, too, will be needed and will have responsibility. We, too, will make real, edible pies; drive a car that is actually running on an actual road; and hopefully–at least on occasion–dress up and be on our way to something that is a very big deal, whether a first date, a job interview, or most definitely one day our own wedding. And, if we are following wholesome tradition, at some point after that wedding we will welcome a baby into this world. And then perhaps another. Babies we will love and nurture and who will love us in return, at least until they become teenagers.

Life doesn’t always unfold according to plan, at least if we’re lucky. But one thing that does seem to be running on schedule in my life at this moment is the rate at which my friends who were married within the past few years are now announcing they’re expecting. For some it’s a boy, for others a girl. And for a few, the secret is still not out. Some announce the old-fashioned way with a note in the mail, a phone call or through e-mail, while others post a picture on Facebook or Twitter or Tumblr of a cupcake cut in two, the interior pink or blue. And a few, God save them, post their three-dimensional sonogram images, an arrow pointing to their unborn child’s goods, so that anyone in their online social circle’s social circle can view a fetus’s developing genitals and simultaneously the inside of a uterus. (No, it does not look just like you. And no, it is not beautiful.)

While the announcements are always slightly expected, they still seem to come as a bit of a surprise. Not so much because I don’t think these women are ready to be mothers, but more so because I don’t feel that I’m ready to be a mother. Or maybe it’s not quite that I don’t feel ready; if I had a baby tomorrow I would know what to do, or at least know enough to get me by until I could get ahold of my own mother. I have the books and bookmarked the websites. I’ve read up on breastfeeding, have a few names picked out and know what cloth diapers I will use, as well as what laundry detergent and household cleaners. I know what fashion sense I’ll impose on them, at least until they know better. I even have a few playgroup ideas and a few schools in mind. My husband and I cannot currently afford the tuition, but I suppose we have some time to figure that out.

I just do not feel ready. I still have so many projects to finish and things to accomplish that take up so much of my time. I’m still chipping away at my student loans, and my savings account has definitely not reached a number I feel comfortable with. I haven’t even hosted a proper dinner party for more than a few guests. And I cherish and desperately need my alone time. I look and act like an adult in many ways, but in many others I still feel very much like a child.

My gynecologist, of all people, tells me I will never feel ready. I will never have everything I want to have in order in order. I suppose this is true. My life will probably never be in order the way I imagined back when I was mixing dirt with water in my father’s tool shed, sitting in my parent’s parked car cursing at no one or dressing up and pretending I was on my way to something important. Until I figure that out, or at least until I deem myself mature enough to guide a new life along its own path, I will continue to get my baby fix by clicking through image after image of my friends with their new additions, each wearing an absolutely adorable ensemble while sleeping or smiling or drooling. Little beings settling into their own places in this world, before all hell breaks loose.

Upon graduation from university, Sarah Schutzki moved to New York, where she spent a few years working in online marketing before fleeing to France for a summer to contemplate life and what she should do with her own. While abroad, she spent much of her time writing and taking photographs, running along the coast, learning a new language and exploring a new culture. She met the man who would become her husband and ended up sticking around, spending another two years roaming the streets of Paris and officially jumpstarting her career in film.

In 2010, Sarah moved back to New York, where she serves as co-founder and executive director of Paris-based NOMAD Films. She's also a producer for the French production company and media house La Blogotheque. In addition, she works as a freelance producer and is currently revisiting her earlier attempts at a screenplay. Sarah is excited to expand upon her writing career as a contributor to Constant Chatter.